A gentle message of hope

I got a lovely email and I thought I'd share it. Maybe the information can be filed away so should you ever know anyone who needs it, you'll know there is a gentle way to tackle cancer should you want to try. Dogs Today has been following the story of CV247 since 1991 and over the years many of the readers have given it a go and even our contributors have become woven into the story (lovely vet Richard Allport is the modern guru since the sad passing of the genius who invented it John Carter). It has been a very personal journey for me, too as you'll find out if you read all the way through. 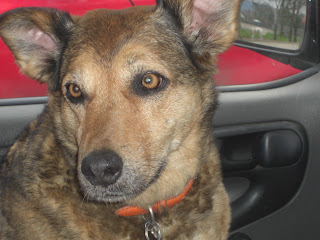 Hi Beverley,
I thought it might give others hope if I let you know that my 14 year old crossbreed Pepe has been trying CV247 since August last year, and has remained very well.
She was diagnosed with lymphoma several years ago and also has bladder cancer. She’s had a number operations, but the bladder tumour has always grown back rapidly. Last July, it was finally deemed inoperable by our vet and she was given about three months to live. She started on CV247 with the brilliant vet Richard Allport. Since then, her previously fast growing tumour has barely grown and hasn’t spread to her other organs. She has had a couple of low spells, where she’s got a bit run down and her Demodectic mange has come back, but she’s always bounced back and is a sturdy, energetic girl, in fantastic condition for her age. Richard did say the CV247 would ensure she was in top condition to fight the cancer.
Pepe was an RSPCA cruelty case, so every extra month of happy life is a bonus. I really can’t imagine she’d still be here without CV247 and I’m so glad we gave it a go, despite our vet’s very negative reaction! Good to think John Carter’s legacy lives on in the animals still being helped.
King regards,
Heather Harrison

Heather's email arrived while I was in correspondence with another dog owner whose dog has just been diagnosed with lymphoma. I asked Heather if I could share her story with others and she wrote back:

Hi Beverley,
Yes, thanks, that would be great. I just think the more of us who say we’re trying it and it’s working, the more confident others will feel about giving it a go. I felt scared and unsure at the beginning because I didn’t think I’d be able to get hold of any and was worried about the side effects, and your blog helped so much.
I don’t fully understand the background, but (as you’ll know much better than me) there’s a lot of suspicion amongst mainstream vets. My own vet was very disapproving, as was the Vet School, who had been treating Pepe’s lymphoma. Daft, really, as they couldn’t offer any further treatment. I’m so glad now I stayed strong and didn’t listen. Our vet can’t explain why she’s still alive, but has given a very reluctant nod to John Carter’s work.
Let me know if you need anything else.
Very best wishes and thanks for giving me the confidence to go ahead,
Heather

Talk of CV247 stirs up all sorts of memories for me. I tried to explain it all succinctly to the owner of the newly diagnosed dog in an email but I become scared that I sound too pushy, like a drug salesman! That it all sounds just too good to be true. Here's my latest attempt at a short version of my own personal CV247 story. I usually just say - it's worth a try, it does no harm and sometimes it does a lot of good.

I did touch on alternative treatments for lymphoma but thought I’d pass this email just received just in case you might be interested.
John Carter was a very unusual vet, now sadly dead. Quite the mad genius.
I met him in 1991 and was a huge sceptic but the people in his waiting room raved about the results he was achieving on terminal cases.
My own dog was diagnosed with inoperable liver cancer a couple of years later and I decided to give him a try as there really wasn’t anything else to try. It was a very gentle method – a liquid by mouth and a diet of fresh organic food that my dog adored and could actually process unlike the diet my vet had prescribed.
From looking like a toast rack with sparse hair she started to bloom. She got better and better and lived for another 7 years.
I was hooked, and became a good friend of the very eccentric John and followed his story closely.
He started treating some humans who had seen their pets get better and again he only took terminal cases. He had an acupuncture qualification which meant he could treat people – but it  was a grey area, but these were adults who knew he was a vet and were happy to put themselves in his hands as they had no other options left.
Roger Cook heard about it and decided to do an expose as part of a cancer charlatans show. John was doorstepped and made to look very shifty. They’d found one relative of someone who had died who was very bitter, her relative had been a patient who had already had lots of chemo and John had done his best but he hadn’t been able to save her - but the patient had wanted to try so he went ahead. Cook ignored all the people John had saved – (which by now included an MP, an oncologist..., a lawyer... ) And just depicted him as a con artist.
John, who was never, ever interested in money and was just obsessed with developing his formula – his life’s work – was devastated. But everyone who had been helped by him rallied around and urged him to prove to others that his method worked to clear his name.
Imperial Cancer Research agreed to do a trial on CV247 on mice with cancer. The results were stunning. A significant reduction in tumour size with no side effects. The best they had ever seen. Professor Sebensky – head of research – resigned and went to assist John in his tiny shambolic vets practise in Harrow.
The ITC upheld John’s complaint about Cook after seeing the charity’s evidence and the Guardian covered the story and a retraction was put on just before News At Ten.
John’s friends set up a company and pushed for a licence so the method could get more widely used. But sadly, as CV247 used very simple existing ingredients no drug company was going to get rich on this formula. The license was blocked by our VMD on a technicality. John became depressed, stopped eating and died.
A few years later I saw  by chance on London Tonight that the licence for Europe had been granted as Professor Sebensky had taken the treatment back to Hungry with him and that country ratified it – making it possible at last for vets throughout Europe to prescribe it.
There’s no vast corporation pushing this method and no one getting rich. But CV247 is being used by a handful of vets and people are finding it useful. It is gentle and it has no side effects. Dogs have great quality of life while their owners try it at home.
A couple of GPs are prescribing it for human use in the UK and there have been fantastic results on terminal patients in cancer wards, too but sadly no one is investing in further trails despite the most amazing results on people who had no other options - if you look at this weblink you can see a documentary that was made about the human use ( bottom two links - http://www.ivymedical.com/media-videos.html – the London Tonight clip is there too. Plus lots of other information about CV247 for human and animal use.).
My father tried John’s method when he was diagnosed with terminal inoperable cancer and given three months to live. Sadly my Dad died of a heart attack after only three weeks trying CV247, but at least he was at home with his family when he died rather than in a hospital and drugged up to the eyes. John had predicted this and was arguing via phone with our GP who was at my house to see my Dad - they were amazed he was still walking around and were trying to convince us to put him in a hospice. The GP was actively refusing to give my father heart medication as she said he was in end stage cancer and should have been having morphine not heart meds. That conversation took place at the precise moment my Dad died. He simply dropped dead. Lots of other people who were treated at the same time with a similarly depressing diagnosis are still alive. I don't think that GP will ever forget that day, either.
If not of interest, don’t worry – just thought I’d mention it. It’s gentle, non invasive and can be used while doing other things if you still want to go the chemo route. Also – not expensive.
Cheers
Beverley


If anyone wants to know more - here's the link to our CV247 blog which tries to pull everything together. One day I hope to write a book about John, but I've been meaning to do this for a very long time!
http://petswithcancertryingcv247.blogspot.co.uk/

Sue said…
Interesting article - definately worth considering
2 May 2012 at 10:36

Naturally Happy Dogs said…
We visited Roger Oakes who is continuing research work on CV247, his first video will be going live on www.naturallyhappydogs.com on 1st June, it sounds like an amazing product
2 May 2012 at 21:31