Skip to main content
June 03, 2012
I just received this email about Maverick, a Rottie with cancer given just 4-6 weeks to live back in April 2010. His owner decided to give some alternative treatments a try including the late Mr John Carter's gentle CV247.
Maverick didn't just survive for 4-6 weeks, or even eight weeks. He had eight more glorious months and fabulous walks. His owner Kathryn gives the final installment to his story. There is a link to the first two parts and the CV247 blog at the end of this article.


Maverick (aka Mr Custard) stayed with us until November 2010 (8 months from diagnosis). Our worst fears were realised when he yelped after he jumped into the back of the car for his beloved walks. 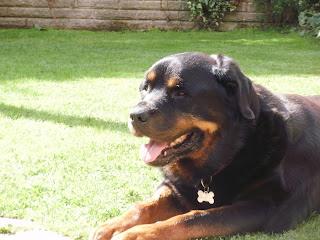 This nine stone dog was unbelievably nimble on his feet and for some time we had been lifting him down from the car to prevent him from jarring his joints which he seemed happy to accept but he was not so keen on our assistance in helping into the car.  Apart from that one yelp Maverick made no other noise although the limp seemed more pronounced than ever.  We both knew there was a strong possibility that the bone was now broken and made an appointment to get to the vets at Oswestry as soon as we could - this was over an hour away.  We still had our other dog in the car who had not been toileted so we drove down to our usual walk en route so she could have a wee before the journey.  Unbelievably Maverick started to cry to be let out of the car as he thought he was missing out on his walk!  We gently lifted him down & he started pulling to get on the walk - we let him have a sniff and a mooch and got on our way.  On our arrival Barbara also felt that the bone would be so weakened that it could be broken however she x-rayed first and this confirmed it was the case - we knew nothing more could be done.  The x-rays of his shoulder looked like a mass of 'snow flakes', there was no solid bone left and a break just through walking alone would have been imminent.  We spent his least half hour talking to him and brushing him (his favourite indoor experience) knowing we had done everything possible for him and this decision was the right one made at the right time - no regrets.  I'm sure people will understand and relate to the dreadful emotions you experience when you've lost a dog and wonder if you did the right thing and whether you should have done more/asked more/pushed more.  Maverick's passing was awful however it was made more bearable because this time we knew we couldn't have done any more.

His journey through cancer involved a steep learning curve for us and I am so glad that I stood my ground at the vets & asked for a referral to Barbara at Oakwood vets.  Her support was unwavering.  For anyone contemplating this journey my biggest piece of advice is that it is never too early to start this treatment.  Back in April 2010 we were told his limp was due to arthritis (very possible in a 9yr old Rottie), however having already lost a previous dog to 'arthritis' that turned out to be cancer, I asked for a second opinion. This confirmed it was actually cancer and we made an appointment with Barbara.  We were fortunate in that we were already feeding a 'loose' version of the bones & raw food diet which forms part of the CV247 whole treatment.  Maverick was taking steroids fro
m our usual vets and Barbara supplemented this with K9 immunitas tablets and echinacea alongside the CV247 - we also followed the dietary advice from John Carter which consisted of organic rice or pasta, raw fruit and vegetables and raw chicken liver - the steroids made Maverick ravenous which meant he ate the food, I think we may have had trouble otherwise!!  I also gave him raw apricot kernels.

So, he started his treatment in April and by June/July he was still going downhill, he seemed to plateau for a while and then slip further down, although he still wanted to walk twice a day, the distance he could manage became less and less.  At this point we felt that another decline in his health would be the last.  We still persevered and for this I am glad, for during July we noticed he seemed brighter and this became more and more noticeable, his coat started to shine and became glossy, his zest for life increased and his lethargy disappeared. The length of his walks increased & he seemed in far less pain. Time and again people we met whilst walking could not believe that he was 10 and had cancer. From a personal perspective I felt that if we had left treatment until his symptoms worsened then it would have been too late as it seemed to take several months

for the effects of the treatment to take hold and it was very scary time watching him slowly decline.


Maverick was given between 4-6 weeks to live in April 2010 by our conventional vets who painted a very bleak picture, we were berated for choosing an 'unconventional' path of treatment.

I do not have a medical background and am just an average person who will listen and be guided by a professionals advice however I also know my own dog and wants what's best for my them so they can live a happy healthy life for as long as possible.

It's difficult to describe in words the journey made by Maverick and ourselves.  You printed a picture of Maverick with a cone on his head a while back in the caption competition, there was some video footage taken at that time and I suppose this is the best way to capture him & show everyone that no matter what the outlook appears to be - there is always hope.  The link takes you to a very short clip of Maverick playing with his beloved cone on the beach in late September 2010 (6 months from his diagnosis of osteosarcoma), would you guess he had cancer - I think not!  http://www.youtube.com/watch?v=DvK5QaD4TRs 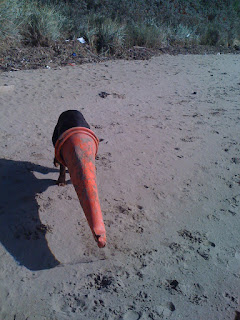