Could this save the Cavalier?

Some of you will already have heard of estimated breeding values, some of you won't. But here is a guide that will hopefully explain what they are and how significant they can be for breeds with more than one significant hereditary problem to conquer.
Thank you so much to dedicated Cavalier owner and campaigner Carol Fowler and Sarah Blott and Tom Lewis from the Animal Health Trust.

A way to breed away from inherited disease in all dog breeds?
Groundbreaking research for dogs is taking place at the Animal Health Trust, under Dr Sarah Blott and Dr Tom Lewis, to provide Estimated Breeding Values (EBVs) for all Cavalier King Charles Spaniels in the UK.
The aim of this project is to develop strategies for breeders for selection against disease while safeguarding the long term health of a breed by maintaining genetic diversity. The Cavalier King Charles Spaniel breed suffers from two very widespread and serious genetic diseases: Heart Disease (Mitral Valve Disease, MVD) and Chiari-like malformation/Syringomyelia (CM/SM) The breed also has lower incidences of Episodic Falling Syndrome, Dry Eye Curly Coat Syndrome, Epilepsy, Deafness, Eye Disease (Multifocal Retinal Dysplasia, MRD) and Pancreatic Disease. With so many inherited health problems and the two most serious at such a high level of incidence, attempting to eliminate them would reduce the gene pool to a dangerous level. The work at the AHT aims to provide breeders with tools to ‘optimise’ the choice of dogs so that there is low risk of serious genetic disease in the offspring and genetic diversity is maintained at a sustainable level. 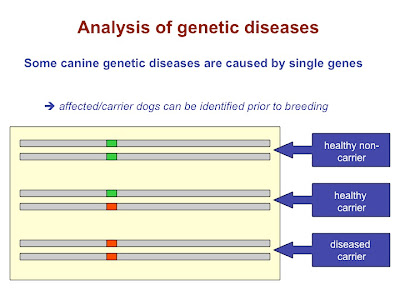 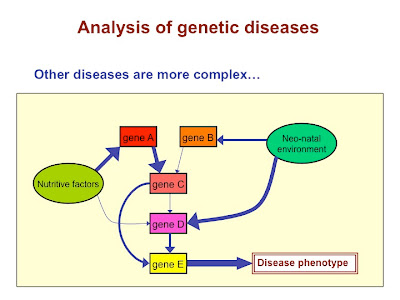 How is this done?
In order to provide the Cavalier breed with EBVs for its entire registered population, a huge amount of health data needs to be collected and the pedigree of the dogs known The health data is correctly termed ‘phenotypic measurements’. A dog’s phenotype is what we see in the dog. It includes its physical characteristics, clinical signs, and also heart test results, eye test results and MRI scan (Syringomyelia) information.


The DNA research of Dr Clare Rusbridge and Penny Knowler collated over several years has provided a large database of phenotypic information, DNA and pedigrees for Syringomyelia. The database holds 11,800 related dogs, including over 700 MRI confirmed dogs and over 1,500 DNA samples. Building on this database, additional health data and DNA is currently being collected by Drs Sarah Blott and Tom Lewis. Initially EBVs will be provided for Syringomyelia and Mitral Valve Disease but as data on other health problems builds up, other diseases will be taken into account as well. 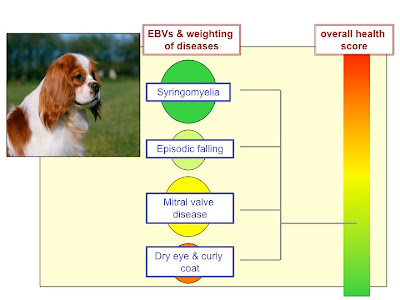 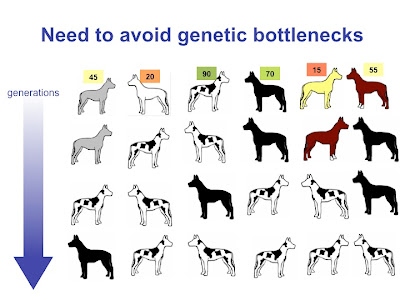 Identifying the genes for Syringomyelia
At the same time Dr Guy Rouleau and Dr Zoha Kibar at the University of Montreal, Canada, are using the Rusbridge/Knowler database and DNA to identify the causative genes for Syringomyelia. Finding the SM genes (or gene markers) could enable breeders to use a DNA test to identify at birth the dogs carrying the defective genes. The genetic information could also be fed into the EBV program, enhancing the accuracy of the breeding values.

Analysis of genetic diseases
Some canine genetic diseases are caused by single recessive genes, so that you have a healthy non-carrier of the gene, a healthy carrier of the disease gene (the dog has one copy), and a diseased carrier (the dog has two copies of the disease gene). Other diseases are more complex in that several genes are involved, so depending on how many of these genes are inherited, a dog is severely, moderately or mildly affected by the condition. Expression of the disease may be moderated by environmental factors as well, depending on the nature of the particular disease. Hip dysplasia is good example of a condition which is complex and also influenced by environmental factors. Syringomyelia and Mitral Valve Disease are also complex diseases likely to involve more than one gene, and are further complicated by the fact that they are variable onset diseases. Dogs may be affected at a young age or they may not be affected until middle or old age

A complex statistical technique can be used to estimate the genetic variation between dogs. The heritability of a disease (how much is caused by genes and how much by environmental factors) tells us how quickly selection away from one disease will work; genetic correlations (genetic risk of disease A and disease B and whether breeding away from one disease will lead to an increase in another); and an individual dog’s breeding value. Syringomyelia is reasonably highly heritable which means that reducing its incidence and severity could be achieved within a few generations.

What are Estimated Breeding Values?
An Estimated Breeding Value reflects the genetic risk for an individual dog with regard to disease. It removes the effect of environmental factors and is the most accurate measure of breeding potential. An offspring’s score is the sum of its parents’ score divided by two. The EBV indicates where an animal is in the population’s scale of risk and enables more accurate and sensitive selection against those diseases. 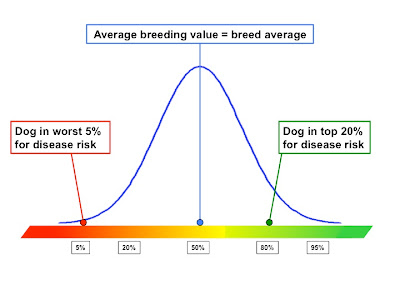 In the current program, EBVs will be given for Syringomyelia and Mitral Valve Disease. Other diseases which are inherited in Cavaliers, such as Epilepsy, Episodic Falling Syndrome, Multifocal Retinal Dysplasia, and Dry Eye Curly Coat, can also be added in at a later date.

Improving the accuracy of EBVs
For EBVs to be accurate you need to have health information on as many family members as possible and as many Cavaliers as possible throughout the UK. This will come in the main from breeders but the contributions from pet owners are also extremely valuable. When the DNA markers/genes for Syringomyelia (and perhaps eventually Mitral Valve Disease, Episodic Falling and Dry Eye Curly Coat) are identified the genetic information will also be added to create more accurate breeding values. Gene markers identified by a DNA test will give a more accurate prediction of a dog’s disease risk without having to wait for the information from the dog’s offspring. It is very important to note, however, that EBVs and DNA tests must be used as part of a breeding program where inbreeding is controlled. Genetic ‘bottlenecks’ such as that produced by the over use of popular stud dogs (so called ‘popular sire syndrome) must be avoided to maintain genetic diversity and keep the breed as a whole healthy.

Can EBVs change?
Most certainly, yes. As more information from the dog itself, or its relatives, becomes available, the EBV can change as the accuracy of the estimate improves. And since the EBV represents a dog’s genetic risk of disease relative to the rest of the breed, if selection away from a disease is successful then the EBV will fall slightly. This will also affect the average breeding value for the breed as a whole. Puppies born to sires and dams with breeding values which are better than average will lead to a shift of breeding value distribution, with a new, better average – meaning the breed is getting healthier. For example, a dog previously in the best 20% is now only in the best 40%, since selection has improved breeding values throughout the population. 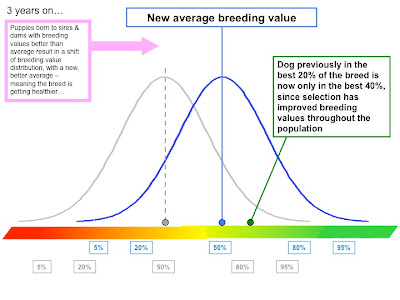 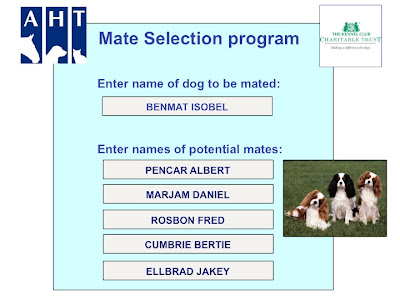 An online mate selection program will be provided for breeders and owners whereby they can enter their dog’s pedigree name and know what the estimated breeding value is for their dog, that is, how healthy their dog is in genetic terms. A breeder who is a bitch owner will be able to enter the bitch’s pedigree name and the names of five or more possible mates. The program will be able to give each one a score below, average or above the average for the breed. Alongside each will also be given an indicator of how accurate the score is for that particular dog. The top ranking dog according to its genetic health status will also be provided. It will also be possible to evaluate matings based on both EBVs and projected inbreeding, allowing breeders to select matings that reduce the risk of disease while at the same time restricting inbreeding. 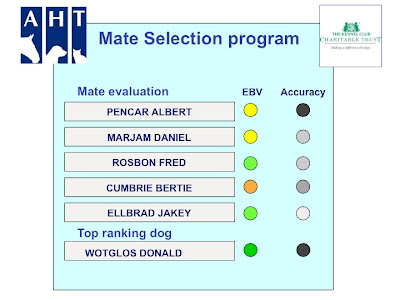 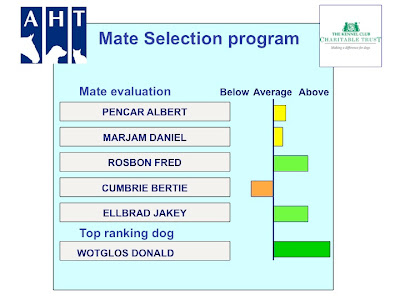 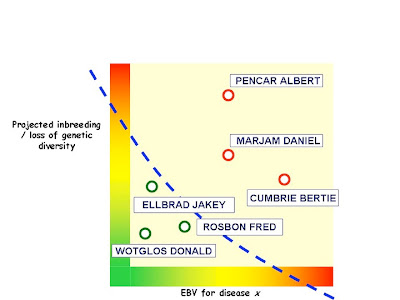 Anonymous said…
Brilliant! Could save all our breeds...All right if I transalte bits of this and put it on Collieinfo website in Swedish, with a direct link of course to your blog?
regards,
bodil Carlsson
1 July 2009 at 08:25

Beverley Cuddy said…
Hi Bodil
The more people who read this the better - so go ahead!
Cheers
Beverley
2 July 2009 at 06:29

jo siemieniowski said…
fasinating! good news on the horizen for cavaliers at last!
6 July 2009 at 07:35

Anonymous said…
I recently came accross your blog and have been reading along. I thought I would leave my first comment. I dont know what to say except that I have enjoyed reading. Nice blog. I will keep visiting this blog very often.