Tell Lloyds and Halifax what you think of them

I want you to write letters, post on forums, Tweet. Engage with bank staff. Tell your local media. Let's make as much noise as possible as quickly as possible.

The BVA, Wood Green, Blue Cross, National Animal Welfare Trust, The Mayhew, Dogs Trust and Tailwaggers Club Trust have now all expressed their regret at Lloyds and Halifax's behaviour. We're hoping other animal welfare groups will also encourage their supporters to contact Halifax and Lloyds and complain. Let's get them to listen and realise that half of their customers own dogs or cats!

We've now got a leaflet, too - click here to print at home. Here's a sneaky peak at it! 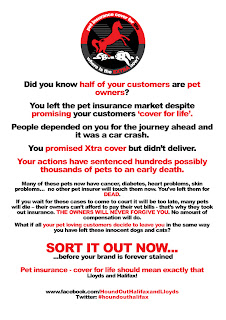 They need to sort it out now before their brands are forever stained with the blood of dogs like Bertie. He is a rescue dog, his previous owners had used him as a football. Michelle took him on and saved his life. 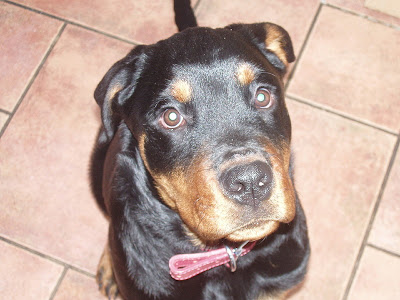 This is Bertie and these are Michelle's words:

"We did the right things for Bertie, got him insured with lifelong cover from day one."

Bertie developed Eosinophilic Disease - which is incurable - but can be treated with medication. He is not even five until July.

"I was informed four weeks before my policy was due to be renewed that the Halifax were ceasing insurance. This has left us in an awful situation. Bertie is insured for £6,000 per year and most years we came close to using most of this sum (although I wish for my boys sake we didn't). No insurance company will take on a dog with previous conditions and I need to find an extra £6,000 a year from somewhere. If I had that kind of money I would not of needed insurance. Halifax has signed many a pet's death sentence.

"I trusted this company, I thought Bertie would be safe."


Come on everyone, there are hundreds possibly thousands of people like Michelle in this position thanks to Lloyds and Halifax exiting the insurance market after selling a policy that promised "cover for life". Responsible owners  trusted these banks because of the millions they spend on advertising that makes them look a safe pair of hands.
Let's stand together - if we do we will be heard. Wood Green Animal Shelters have Retweeted our messages and the BVA have issued a very robust press statement. Others will join as we grow.
Individuals who have been affected by this obviously need to fight for compensation, (email me at beverley@dogstodaymagazine.co.uk and I'll point you at the people giving free advice and ask for more details so we can use your case as an example of the injustices).
EVERYONE else CAN make a massive difference so please read on.

Download a letter to send to your bank manager

Download an A4 leaflet to print at home and give out

Lloyds and Halifax need to know that pet lovers stick together.

If they are allowed to get away with this others will follow.

Dogs and cats are going to die because of the way they have handled their exit from the pet insurance market. Compensation will come too late for many to pay for the on-going cancer treatments, heart meds, epilepsy etc. We need to put pressure on the Banks now - they lent their brand image and exposed their customers to an unstable insurance product and it is they who need to step in to sort this out. Between them those two banks spend nearly £100 million a year to advertise their brands - so they do care what we think and as half of households have a cat or a dog and most of the other half don't want to see people's pets dying because of a corporate cock-up - we are no little minority group. We need to tell these banks we're very upset. The link given on the Tweet gives you the letter I have written. Please improve on it and write your own or harvest the points and write a shorter one! It doesn't hurt to say you are thinking of moving your account.

Here's a brilliant campaign logo designed by the talented Judith Broug - @MissyRedboots on Twitter. Please use it as your avatar to show support! 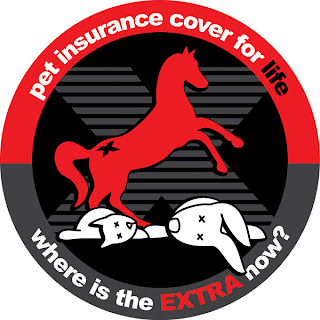 On Twitter here are two tweets I'd like you to RT as widely as possible as they use the banks very expensive marketing messages to promote our campaign.


Lloyds spent £53 million selling us the journey ahead - but pet insurance customers face a one-way trip to the vet bit.ly/wp4dfw Please RT

And don't forget the letter, the flyer and the avatar!

Please get behind the campaign, it could be you next if we don't win this one.

Mandy Jones, head of rehoming at The Blue Cross, said: “This is a really worrying development for animal welfare as pet owners face being left high and dry unable to pay for their animals’ treatment.


“We have seen more and more people unable to afford vets’ fees during the recession and even seen a rise in animals being abandoned as the cost of caring for them soars. The risk is that if insurers continue to pull out of the market or change their terms, more sick animals will go untreated.

“We always urge pet owners to take out insurance but it is always worth going to an established provider and it is essential that owners check the terms of the policy and that they are sufficiently covered.”

and Wood Green, too:

Head of Animal Welfare at Wood Green, The Animals Charity, Shelley Brooker said: “Ownership of a pet brings huge rewards, but also brings responsibilities. One of these responsibilities is to provide healthcare for your pet, another is to protect yourself and your family from unexpected, expensive veterinary bills.

Animals are just as susceptible to illness and injuries as their owners and two out of three pets need veterinary attention every year. With veterinary fees unfortunately continuing to rise at a faster rate than inflation, it is essential people take up pet insurance.

As a leading animal welfare charity who recommends people take up pet insurance on a daily basis, Wood Green is extremely disappointed to hear that responsible pet owners are being let down by two well-known insurance companies – Lloyds and Halifax.

Wood Green would urge those who have paid for lifetime cover for their pets to write to their bank and express their disappointment and concern for their pets.

The Charity hopes that future responsible pet owners will not be put off taking up insurance as there are many companies out there who specialise in pet insurance, such as Petplan.”


“The action taken by Lloyds & Halifax is bad news for responsible pet ownership and animal welfare.

The National Animal Welfare Trust is very concerned that the decision to cancel pet insurance will add to the increasing number of animals that are being abandoned because there owners can no longer afford to care for them.

Caroline Yates, CEO of the Mayhew Animal statement has said:
"The Mayhew Animal Home is extremely surprised and disappointed with the recent decision of Lloyds and Halifax bank to withdraw from the pet insurance market without any redress to their clients who will now suffer for having done the right thing – been a responsible pet owner and taken out insurance.
As part of its adoption process The Mayhew encourages all adopters to take out pet insurance as we see all too often and everyday animals being given up to us because owners cannot not afford private veterinary bills with insurance.  Moreover, our Community Veterinary Clinic is inundated with cries for help for owners desperate to find veterinary care they can afford.
"Sadly, this will no doubt lead to yet more animals being left untreated or dumped with rescue centres that are already stretched to capacity, some animals with on-going medical conditions which will limit their chances of finding a second home in these difficult times.
"Please write to your local branch and ask them if they have a conscience. "

"As a charity we know only too well the devastation felt when people can't afford veterinary treatment. The fact that Lloyds and Halifax have withdrawn their insurance policies is a travesty which will only penalise responsible pet owners and jeopardise the health of thousands of animals. These companies may say the written contracts only last 12 months but the reality is that these owners entered the contract for the life of their pet in good faith and those policies should be honoured. It's a scandalous breach of trust if they are not."
Dogs Trust’s response to the withdrawal of Halifax and Lloyds from the pet insurance market
The decision by Halifax and Lloyds to pull out of the pet insurance market will have dealt a huge blow to many pet owners. The promise of compensation could come too late for those whose pets are too old to reinsure and for whom the cost of veterinary fees for existing conditions are too onerous. This is not a simple case of discontinuing a product on a shop shelf, for some pet owners this will signify the withdrawal of a lifeline, leaving them to make a life or death decision for their pet or else face the prospect of crippling debt from the cost of veterinary fees.

Dogs Trust has long promoted the benefits of pet insurance and is calling on Halifax and Lloyds to act on the concerns of pet owners who feel that they have been left stranded. This is very worrying for owners who are trying to do the best by their pets, but find that they could be subject to change outside of their control.

Dogs Trust is urging dog owners not to be deterred from insuring their pet and will be raising its concerns on this matter with the Financial Services Authority.

Unknown said…
Tweeted both!!!! I think they insure assuming people won't need that much and when someone does they change their minds - won't make any money out of that customer. So so wrong!!!!
11 February 2012 at 18:59

Is there any advantage to paying my premiums monthly by Direct Debit?
Yes, not only does it break your premium down into very affordable payments, but there is no interest to pay whatsoever, the annual premium is simply divided equally over 12 months.
When your policy is due for renewal you can relax in the knowledge that cover will continue unless you advise us otherwise.


Note cover will CONTINUE UNLESS YOU ADVISE US OTHERWISE.

Is there any advantage to paying my premiums monthly by Direct Debit?
Yes, not only does it break your premium down into very affordable payments, but there is no interest to pay whatsoever, the annual premium is simply divided equally over 12 months.
When your policy is due for renewal you can relax in the knowledge that cover will continue unless you advise us otherwise.