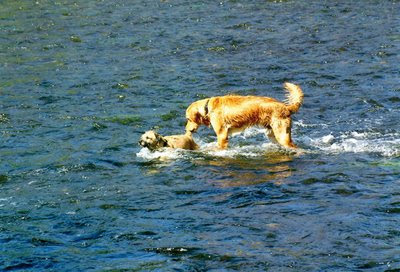 We had a lot of fun judging the caption comp and I have to say the standard this month was excellent!

I need the following people to send their name and address to julia@dogstodaymagazine.co.uk so she can sort out your prizes. May help to say at the same time what type of dog you have as I'm not sure but we may need sizes for the prizes...

From the blog the winners were:

Chips: This inflatable is harder to blow up that I expected.

loll100: Does my bum smell clean in this?/Don't even think about it, it WON'T fit.

(We're leaving it to the chief sub to decide which one of Loll 100's to print in the mag - every now and again we wonder how far we can go without offending people who may be less liberal than us lot. It's probably because we've already offended so many people over the last 18 years that we're eventually starting to learn caution! For example, the edition with all the naked men with their bits cleverly obscured by their Dachshunds and Irish Wolfhounds caused a massive reaction, and not the one we expected!

It was sensitively shot - you couldn't see anything significant. (It was an hilarious shoot though - they had to be naked, it was before photoshop got really good at removing stuff so even skimpy pants were abandoned!) We had an article quoting a psychologist who told us, "What can you tell about a man by the size of his dog." It was very funny and did make you think.

Well done everyone, some crackers came in direct to the email address and by post - so you may still have won - the only ones I list are the ones posted on the blog.
Email Post
Labels: Competition naked men Tony Blair

Beverley Cuddy said…
Chips - we need your address asap for your prize and for publishing in the mag - can you email julia@dogstodaymagazine.co.uk very quickly as the pages are about to go to print!
12 February 2008 at 17:17