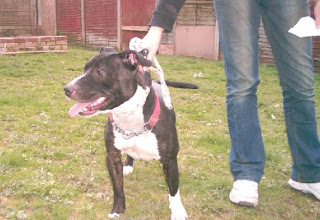 Roxy has been in the care of the council for three weeks after she was found straying. She is a Staffordshire Bull Terrier.
Her owner was found and wanted her back, but when the dog warden tried to take her home the owner was not in. After much following up the owner finally announced he actually did not want Roxy after all as he did not want to pay the fine (£24) as he could not afford it.
Roxy has not had a very interesting life so far. She has lived in a high rise flat and the man worked for 13 hours a day. Because of this Roxy needs to be retrained in the house as she as never had any proper puppy training. She is now about two years old.
Roxy is microchipped, but will need to be spayed and vaccinated.
Roxy is in Surrey - if you can help her find a new home and happiness contact Emma on 0797 356 9371 or email: Adrs@aol.com

Also looking for miracles:
Twinkle - approx one year old Staffie x Lurcher. A bit nervous to start with but fine when she gets to know you. She was found running loose with a harness and lead attached but nobody has ever came forward to claim her.
Twinkle is good with other dogs but a bit dominant so would suit being homed with a nice neutered male.
Because of her nervous streak no young children, but teenage/adult household would be fine.
Twinkle will need to be spayed, vaccinated and microchipped.
Trixie adorable little Staffie x Jack Russell who is great with other dogs and brilliant with people. She was picked up after spending a month living under a porta cabin.
She is approx eight months old.

Trixie does need to be housetrained as she has been living wild for at least four weeks. She has shown signs of being an escape artist but only to get to the kennel staff. She loves attention.

Maggie is very confident little brindle and white Staffie of about a year old. She is fine with male dogs and good with people, but does not like her collar being grabbed.
Maggie was picked up as a stray and never claimed.

As Emma said in her email to me... it seems like a never-ending stream of Staffies and Staffie crosses.

Wasn't it lovely to see a post from Otis's new owner a few blogs ago. Makes you warm inside to know that Otis (now Jake) has fallen on his feet. Let's hope for the same results for Roxy, Twinkle, Trixie and Maggie. Fingers crossed!

Good News!
Email from Emma: "I had a call from a lady who has a neutered male Springer Spaniel and she sadly lost her Staffie bitch on Boxing Day. She has now adopted Roxy and is not worried about having to housetrain her.
"All the others are still looking though. Emma."
Email Post
Labels: Roxy's poxy owner

bugs said…
I really hope that all these babes manage to find their forever homes, where they will get the love they deserve.
21 April 2008 at 11:47

Anonymous said…
I wish i had space for any of these doggles but I already have my hands full with 5. I can say however that bull Lurchers are a very rewarding breed, are very human orientated and make good agilty dogs. My bull lurcher girl will be starting classes shortly. They do need reward based consitent training and to know there place when living as part of a pack so homes with experiance of bull or bull lurchers is a must. On a darker note bull lurcher owners need to be vidulant and very secruity minded as these dogs are highly prized by the dodgy doggy underworld, due to there size being bigger than your average staffie they carry more weight making them even more suited to evil sport of dog fighting once they've had been subjected to the horiffic training these evil people trade on.
Owing a bull lurcher has another down side, ignorant people who don't know what they are, don't know what a pit bull looks like and hastalty slap a label on them at first sight.Ignorant comments, crossing the road to aviod you are all part of the parcel, as is with many large breeds and the sometimes warranted dog phobic public.
The love my girl Lexi gives me out weighs these points this a million fold. Lexi is a big cuddly snog monster, about a viscous as a rice pudding and i'm proud to own her.
nicky T
21 April 2008 at 13:47