The Tracks of our Tears update

In the August issue of Dogs Today, now out. We carry the very sad story of Max on my editorial page. I reproduce it here in case you haven't yet read it and now include Network's Rail's comment that came to late for inclusion:

Dear Readers
In 22 years I don't think I've heard a sadder story than this one.
On Friday, Max, a young white GSD, bolted from outside Asda in Biggleswade. Owners Steve and Avril Young searched tirelessly day and night and involved the fabulous DogLost. 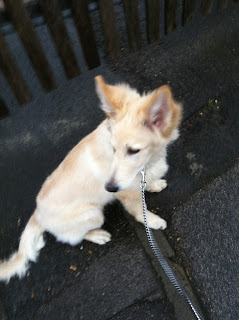 They heard news on Wednesday of a sighthing of Max on the train line that ran behind their house - he'd obviously tried to make his way back home, but there was brick wall stopping him. (Further down the tracks there'd been an open gate noticed.)
Steve took some hot food and climbed on to the railway land to find his dog - he saw Max, but he was very spooked and he couldn't get near. 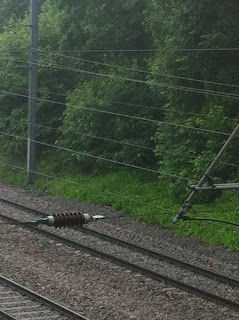 Steve decided to try again overnight when it was quieter, but the weather was too bad and he couldn't even get over the fence. At 7.30am he phoned 101 for help.
Andy from the Network Rail Response Unit phoned Steve and arranged to meet at Biggleswade station, a two-minute walk from where Max was hiding.
Andy revealed Max had actually been on the line since Friday - six days. Andy said he had been called out three or four times already but hadn't been able to catch Max.
Steve suggested involving the fire brigade, who were standing by, if Andy could stop or slow the trains.
Andy ignored this idea and decided to try again, slowing the north-bound trains nearest to Max.
Max bolted again and Andy called for back-up. One more worker arrived.
More of Steve's family assembled and were positioned on the level crossing - they were told they were not allowed to go on the tracks.
The two Network Rail men started flushing Max and driving him up to the crossing - but they also moved him off the safe tracks where the trains were slowed and on to the busy London-bound tracks. The family watched in horror. "The Network Rail men seemed to do nothing to try to move Max back to safety and kept pushing Max on despite the train that was fast approaching," Steve told me.
A fast London-bound train, beeping its horn desperately, killed Max less than 100 yards from Steve and his family.
Steve told me that Andy from Network Rail said, "We have an outcome."
I told the RSPCA Max's story; here's their comment:
"We're extremely sad to hear of this tragic incident and send our sympathies to the family.
"Whilst we're sure Network Rail staff did not deliberately intend to put Max into the path of a train, we will be discussing this issue with them to see whether anything could have been done differently. I'm sure many of the staff have pets themselves and would never wish this to happen, but we all need to ensure that tragedies like this are prevented in future.
"Training will be one of the issues that we will be discussing with them."
Sadly, Network Rail was unable to provide a quote in time for inclusion here - I will put it on the blog if one materialises.
I am sure you'll join me in sending Steve and his family all our sympathies.

And more on this...
Last month we told you the story of Cassie, the hearing dog killed on the railway and we also mentioned Blue again, the dog who had squeezed through a hole in a fence and was run over by three trains. We received some very distressing mail in relation to this feature. If you turn to our extended Doggie Postbag on page 94, you'll read Badger and Treacle's stories of grief, made very much worse by Network Rail.

"We have now spoken to our members of staff involved in trying to catch the escaped dog and it's clear from their first hand account that they went out of their way to try and catch the dog and spent many hours over several days trying to catch him. One of our team was particularly upset at what eventually happened as a previous dog owner himself - but the dog would not come to calls, would not respond to enticements and ignored commands and continued to be spooked and run off from anyone who tried to catch him, strangers and owners alike.

Below is an extract from our staff member's recollections.....

On Saturday 16th June on my way home from night shift at Hitchin, I noticed a dog walking south in the down cess (the area to one side of the track) in between overhead line stricture 113 and 112 near Biggleswade.

My train was on the down fast (fast line heading north) due to a failure of a signal in the area which one of my colleagues was attending to. I called my colleague about the dog, to keep an eye out as he was in the area and try and catch it but was unsuccessful.

On my journey to work on the same day for the night shift, I again saw the dog in the same place but sitting behind an overhead line mast. I decided to get off at Biggleswade to try and catch him.  I spoke to the signal box and arranged for one of the lines to be blocked to allow me to walk down it and try and track him down.

The dog saw me and ignored my calls and ran north towards Lindsells crossing. I tried to follow but gave up after about half a mile and headed back to the station and called the signal box to reopen the line.

I borrowed a work vehicle and drove round to Lindsells and walked down the down the track back towards the station. I got to where I'd seen him before but with no joy and headed back to the crossing. On reaching the xing, I saw the dog coming from the north so I wedged the gate open and waited. Again as soon as he saw me he ran off north. After shutting the gate I gave chase along the down cess. I followed for another quarter mile and lost him and presumed that the dog had slipped through the wire strand fence at this point (it's full palisade security fencing for some distance either side of Bigglewade station and then once reaching more rural areas resumes back to standard livestock proof fencing (sheep and cows).

By now I had spent almost two hours trying to catch him without success and so I called the police to report it.

In the early hours of Thursday 21st, my colleague was contacted as they'd had a report, not from the owner, of a dog on the line. He went up to Biggleswade but couldn't find any trace of the dog.

I was contacted by another colleague at about 07.45 about the dog and they gave me the owner's mobile number. I met the owner at the station and he gave me a lead and some sausages to tempt the dog.

I again blocked one of the lines to took a block with the signal box but again the dog took off north. The owners were waiting at Lindsells, but every time he saw them he ran back south. After much chasing between the station and Lindsells(distance of almost a mile), taking blocks with the signal box and handing them back, enlisting the help of Barhale staff, and getting other colleagues help, just when we thought we were making progress the dog got spooked and tore off across the tracks and was fatally hit by a train on the up slow (south bound train)about 100yds south of the xing.

My colleague and I ran to the dog in case it was injured, but it was apparent it was deceased. We moved it off the line and went to speak to the owner. The owner gave us a blanket and we brought the remains back to the crossing. The wife of the owner was very upset as were we, but we had done all we could spending many hours over several days trying to catch him but he just would not respond to anyone and seemed unable to understand or take notice of any commands."

We very much hope Network Rail will take up the RSPCA's suggestion of training for their staff on how to catch dogs that are loose on the lines. The letters in post bag about Badger and Treacle are very, very upsetting. Cassie's Fence Campaign is something we very definitely support. Click here for more details. And if you don't already know the story of Blue, a dog that went through a very badly maintained fence after a squirrel and was run over by three trains and survived. The owners have remortgaged their house to try to pay for the vet bills but they are still struggling. Click here for a link to their Just Giving page.

Anonymous said…
As a DogLost volunteer I spent some time searching for Max. Deeply saddened by the outcome. Our beloved Lucy Lurcher was hit by a train just north of Lindsells crossing in 2010. Palisade fence wasn't in place at that time. As it was weekend her body lay on the line until Monday when Network Rail brought her home. I would question the claim that fencing in rural areas is stock proof.
16 July 2012 at 18:00

Alfie - Alfie's Blog said…
This is such a sad story - we live right next to some rail tracks and my humans are always worried I might somehow escape the garden and end up on the tracks.

We bought the magazine for the first time this month as you had a small feature about us Entlebucher Mountain Dogs - then my human spotted the strictly pawroom feature and guess who's gotta learn all those steps now! *waggy tail*
16 July 2012 at 22:17

Unknown said…
Thank you to this magazine and the lovely Beverly for doing this for us,
however I still have a few questions that I need answers to
1. why was max left on the line for so long?
2. why was the local dog warden or the RSPCA informed of a loose dog on the line?
3. what if anything did the police do, once supposodly having been informed of a stray dog on yhe line? (by network rail)
4. why did the network rail operative tottaly ignore my suggestion to him? (or had he already made his mind up!)
17 July 2012 at 21:40

Planet Bow Wow said…
This is very, very sad. However I am very surprised that there was such a tragic outcome to this story. If, as was the case here, NR had great difficulty capturing the poor dog, they should have enlisted the assistance of the RSPCA or animal welfare officer from the council (warden) to help. It is entirely natural for a frightened animal not to come to a stranger but I do not think it should have ended in tragedy. I also realise that public safety was paramount here & they did not want the owner coming onto the track, but maybe they could have chaperoned the owner & allowed him/her to call to the dog - maybe this could have provided a resolution.
23 July 2012 at 14:04