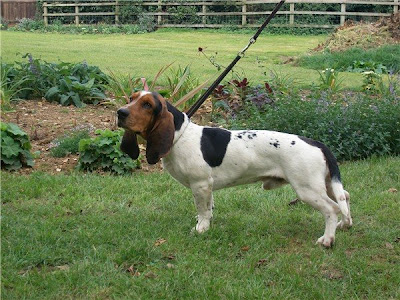 An Albany Basset with a lot less 'furnishings' than you'll find at DFS!

The Sunday Telegraph story did indeed centre on the Albany Basset Hounds. Well done to the super sleuth Bloggers who figured that one out!

For more than 50 years the Albany has had a pack of working Bassets that can still do what the original breed was designed to do. These short-legged hounds were perfect for those wanting to hunt without horses as their shorter legs made it possible for people to keep up on foot.

Here's an extract from the Albany website which explains why they split from all things Kennel Club:

"In 1972 the working branch was reorganised and renamed as the Albany Bassets. The pack was admitted to the Masters of Bassets Association (MBHA) with registered hunting country around Stamford, Lincolnshire. The Albany was formed and financially supported by members of the Basset Hound Club (BHC) to ensure that Kennel club (KC) registered Bassets should be able to work in the field as well as pose on the show bench.

This framework was to last for 30 years until 2002 when the BHC withdrew all their support and the Albany became a subscription pack with the hounds belonging to the committee. The Albany found the modern KC Basset too heavy and cumbersome to work well over winter plough, to get out of ditches and streams and lacked the drive to work hard for up to three hours.

To improve the quality of the hounds and ensure the survival of a working pack of Bassets into the 21st century the Albany outcrossed their working KC hounds with hounds registered with the MBHA, specifically the Fourshires and Huckworthy Bassets. Although the use of hounds, registered with the MBHA for breeding was written into the Albany constitution, the BHC quoted this as the reason for no longer supporting the Albany. The original principles of the BHC had been “forgotten” and there are currently no field trials for KC Bassets to test their scenting ability, stamina, voice or pack temperament."

Some of the more interesting quotes in the Telegraph piece are from KC Secretary Caroline Kisko. Here they are ...

Ms Kisko said the Kennel Club was already funding research into the dogs' health problems but admitted: "We could have started earlier."

She added: "There is no blanket solution. We have to look at it on a breed-by-breed basis."

The Kennel Club was concerned that the documentary had already prompted many puppy-buyers to turn to non-Kennel-Club-registered cross-breeders whose interests were "purely commercial", she said.

The Club had made donations to the RSPCA and felt "betrayed" by the animal welfare organisation. "We helped them and they have stabbed us in the back," Ms Kisko said.

Is that a glimmer of hope I'm detecting? An awareness that the KC should have been doing more serious stuff to safeguard the pedigree dog "a little earlier".

I guess when you look at timescales involving dinosaurs, twenty years is indeed a mere blink of an eye. But it was indeed over twenty years ago that the Nordic KC's started their sensible measures to safeguard their own pedigree dogs.

Oh you know, those audacious and wacky concepts like... mandatory health testing before breeding, limiting the overuse of popular sires and other inbreeding, working committees on avoiding unhealthy exaggerations, temperament testing... etc

As they used to say in Clarges St when I used to work there, those young Swedish upstarts and their crazy progressive ideas - after all they are novices at this KC lark - they only started in 1889.

As for the RSPCA daring to say what they think about animals suffering despite the very generous KC having given them a chunky bung of money - well it's a public outrage obviously! How dare the RSPCA not keep quiet and let the KC bumble on at a snail's pace.

And how can the KC measure this flood of silly misguided public rushing out to buy designer crossbreeds? As these breeders don't pay the KC any money - unlike those lovely puppy farmers - how can the KC monitor this shift?

And as for there being no blanket solution - maybe there's two of those 'insignificant' hereditary cataracts (that Caroline Kisko seems so untroubled by) that are clouding their vision?

Here's my manifesto for change should I get the keys to Clarges Street!

1. Limit the overuse of popular sires and stop close inbreeding. Calculate the coefficient of inbreeding for every new litter registered and display it on the the dog's registration certificate together with an explanation for what is an acceptable figure.
2. Make health testing mandatory where good existing schemes exist - eg hearts, hips, eyes etc. Ditch the discredited Accredited Breeder Scheme and make testing and good breeder behaviour the norm. Have a two-tier system that the public can easily identify so that anyone breeding who can't yet comply with the new requirements isn't completely lost to the system - but make it only the top level of reg that can produce dogs that are shown. Dogs with the lower type of reg would have to be health tested before they can be bred on from. Charge much more to register dogs that are untested instead of charging the good people a premium!
3. Stop unhealthy exaggerations being rewarded with significant changes to the system that are honestly designed to alter the way the breed looks are not just done reluctantly and cynically to deflect criticism away from the KC and onto to others.

I do get so annoyed by the KC and their PR spin, they need to honestly want to change - it's dogs lives they're messing about - it shouldn't be all about pride and losing face.

Here's an example of the sort of mealy mouthed 'reform' we're likely to get if they don't sincerely want to change.

In the run up to the documentary the KC had for them a bit of a rush at tweaking things so they didn't look quite so dreadful.

One of their cunning plans was a word change to their official Challenge Certificates (awarded to the best in sex of each breed - that coverted bit of paper that leads to dogs becoming called Champions).
It used to say:


But I am told, by a very experienced judge, that the new CC she recently awarded had wording that certified that the judge found her winner to be healthy.

On the face of things that sounds a step in the right direction, but sadly the judge in question only became aware of the new wording by chance after she'd already awarded the certificate. The KC hadn't told her to judge any differently than before or indeed how to assess health - as she told me, "I'm not a vet!"

The judge was genuinely very, very concerned that she'd signed something that she couldn't possibly know to be correct.

I've just had a look at the KC's most recent published Annual report... I quote.

The Kennel Club has six key strategic objectives:
1. Ensuring that the Kennel Club is the first port of call on all canine matters.
2. Recognising the importance of canine health and welfare.
3. Popularising canine activities focusing on the retention of existing participants and
the attraction of new.
4. Achieving a widening of the Kennel Club membership base.
5. Encouraging the development of all those concerned with dogs through education
and training.
6. Encouraging more people to provide input into the Kennel Club’s decision making
process.

Well let's give them a big dose of number six - tell them to get on with their number two objective and not just 'recognise' the importance of health - start actively doing something to make it happen!

A beautiful Basset that looks like he can run, hunt, enjoy a great life without being encumbered by too much skin, too short a leg, too low a chest. Gorgeous.

Can't comment on what you say about the KC as elsewhere I have made a pledge not to make anymore sarcastic comments about them but to allow them instead to get on with what they have recently promised us all.

Anonymous said…
The Albany Bassett people have set a wonderful example for the other breed clubs to follow.
It's extraordinary that they should have been struck off by the KC for their good work.
So many breeds could be transformed with the help of a suitable outcross.
The trouble is, the KC bosses are very rigid in their thinking and don't seem to grasp the extent of the problem and what is needed to put things right.
Yet ordinary dog owners like me have been concerned about the health of pedigree dogs for years.
Meeting other dog owners on walks we get to hear about the cavaliers' problems, the GSDs with the crumbling hips, the Westies with their itchy skin, and so on.
It makes me think there needs to be a change of regime at the KC.
22 September 2008 at 15:52

DoglovingLou said…
How beautiful is the Albany Basset Hound? It looks so much more healthier and even seems to stand in a more upright fashion with ease.
24 September 2008 at 02:42