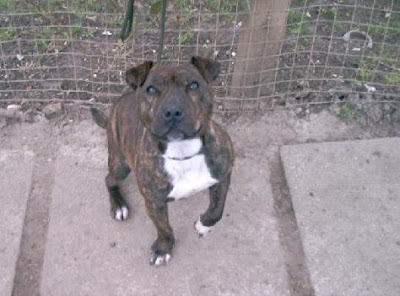 Can anyone help Otis please? Just got a very urgent email, this poor fellow is on borrowed time. No one has room and he's about to come to the end of his stay on death row. There's probably hundreds of unwanted Staffie crosses about to be euthanized all over Britain, but now this one isn't just a statistic. We know his name. We know he's there.
Otis is about two years old and is not good with other dogs but is good with people and although he can be a bit stubborn he is a very sweet boy. He would need to be walked onlead because of his nature. He would be better suited to someone who had teenage children or an adult household.
No cats!
Otis would need to be vaxed, chipped and castrated.

Finding a home for dogs like Otis was not helped by the negative depiction of a Staffie-type dog on Casualty this weekend. I got an urgent call today from someone in Staffie rescue who was already feeling very stretched - she saw Casualty as such a low blow to the breed. She asked - why would any dog trainer allow their dog to be used to depict such a terrible stereotype? Good point. Wonder if that pay cheque is making them feel a bit queasy? Blood money?
Let's try and buy Otis some time, 30 emails just looking for a temporary space have all come back saying sorry we're full - so the future is looking more than bleak for this poor boy.
Otis's plight struck a particular chord with me this evening. I am reading a very strong kids book to my son, a chapter a night. It's called Dog Lost - will look up the author later. It's about a Pit Bull pup called Cash that gets given to a little boy by his alcoholic single dad. The boy and dog become such great friends, but one day the dad tries to hit the boy and the Pit Bull stands between them and protects his young master. Pit Bulls are in the news and the father uses it as an excuse to chuck the dog out. The Pit Bull gets dumped and the little boy becomes so sad and withdrawn, like he did when his mum died. We're reading how the clever dog fends for itself - but the poor young dog has just been taken in by dog fighters. I have to say it is a huge tear jerker. And so believable. It makes the point that as soon as one breed is banned people who want aggressive dogs just move on and ruin another breed.
Maybe Otis has a sad story, too. He probably thought he was loved, thought someone was coming back for him.
Wonder how many more Staffies and crosses were dumped after the nation watched Casualty?

Come on folks can we make some space for Otis? Anyone got a spare kennel to take him out of immediate danger?

Please let us know what happens & please cross post this far and wide! This is life and death.

PS. Just had an email from Emma, she'd just read the blog. "Funny you should mention Casualty. We had a Staffie x EBT brought in today who was dumped at a vets by the owners as after they had seen this programme they thought that the dog may attack the kids. He was supposed to be put to sleep but was handed over to the dog warden instead. He is about four months old."
I'm off to bed. My son's story book had a happy ending. Cash the Pit Bull saves a few people's lives while she's a stray - even saves a cat. She's reunited with her boy who moves out from his abusive father and go to live with his step brother.
Let's hope we can at least give Otis a happy ending, although god help every Staffie and cross out there with the anti-dog climate the way it is. 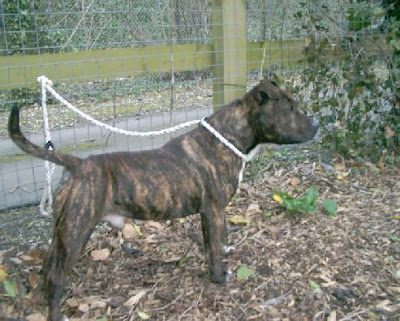 Chapstaff said…
I wish soo much that I could help, but I have a Staff myself. A very friendly dog-loving (for the moment) 9 month old puppy

I complained very strongly to the BBC for their insensitive programme, shown at a time when there have been a lot of dog attacks in the news, & we all know how Staffs & Pitbulls look very similar.
I pointed out that Pitbulls, generally speaking, are extremely loving dogs towards humans, & are desperate to please....in the right hands, as with any dog.

I hate all this breed-specific stuff that's going on. It's only the Staffs, Pitbulls & Rotties who are making the news. The headline "Killer PitBull Type Savages Child" sells more papers than "Dog Bites Child" even though "random breed" dog attacks happen far more often.

I am so worried about how it will all end.

I just can't see how we can stop the yobs training up powerful dogs to attack.

Flowerpot said…
I wish I could help too but we have a cat. This whole post made me cry - I do so wish I could do something. I'm glad the book had a happy ending and do hope poor Otis does too.
18 March 2008 at 09:23

bugs said…
My heart bleeds for this boy, I really wish I could help. Unfortunately, I already have 3 rescue dogs, 1 staffy + 2 staffy X's. Like Chapstaff I complained to the BBc about the episode of Casualty shown last Saturday. I haven't heard anything back yet.
18 March 2008 at 11:38

Beverley Cuddy said…
Hi Michelle
I am told the Dogs Trust do take other dogs from this shelter, but not usually the Staffies/Staffie crosses which amount to 90% of the strays.
Dogs of other breeds and types are much easier to rehome and many more dogs can be placed as a result.
We did an article on cherry picking in a recent issue of Dogs Today. It goes on all the time.
Dogs Trust prefers diversity rather than filling up their kennels with just one type of dog that are sadly slow to move.
Cheers
Beverley
21 March 2008 at 13:37

DoglovingLou said…
I have cross posted the information for Otis to an online group that i'm in. Maybe someone will be able to offer advice or even a home!

I too wish i was in a different situation to help with Otis. I own 2 dogs so no good here.