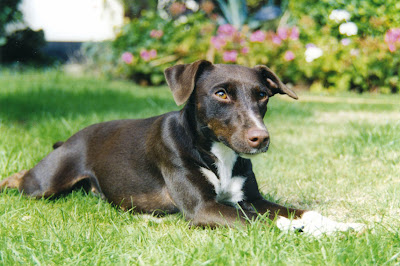 Can you guess which breeds Smartie's parents are? The first correct entry wins either a breed-specific book or a general book on dogs courtesy of Interpet Publishing. Please tell us which breed you'd like or 'general' with your guess. Clues tomorrow if it doesn't get guessed before that! Email comps@dogstodaymagazine.co.uk ASAP!

FIRST CLUE: Both of Smartie's parents are Terriers that you won't see at Crufts.
SECOND CLUE: One of the parents is named after a religious man, the other has two popular names and both have Lake District connections

Well done everyone - this has now been won! Smartie is a Patterdale and Jack Russell cross 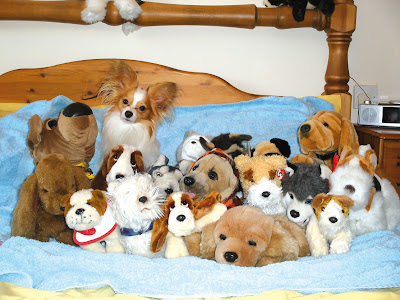 Can you think of a funny caption for this great photo of Toby, a Papillon owned by Helen Verity.

This has now been judged - thank you for entering!
The best wins a KONG Jump'n Jack and a dispensor of KONG Stuff'n'Breath courtesy of the Company of Animals. The ultra bouncy KONG Jump'n Jack is great for sharpening a dog's reflexes. The Breath Paste is mildly abrasive and is quick and easy to apply to the grooves of the Jmp'N Jack so it works as a dental toy!
Five runners up will each get a KONG Dental Stick.
Hurry everyone - we'll judge this one tomorrow!
Email your captions to comps@dogstodaymagazine.co.uk ASAP!

I'm going to highlight another petition...

and don't forget our one...

Were you moved by Pedigree Dogs Exposed?
(the distressing documentary about the health of dogs shown on BBC1 in August?)

You may have heard that the RSPCA and Dogs Trust have since pulled out of Crufts in an attempt to encourage the Kennel Club to reform. If you would like to send a clear message to both the Kennel Club and to Government that change is urgently needed to stop future dogs from suffering then please sign this e-petition on the official 10 Downing Street site. The latest letters sent out from DEFRA suggest they haven't yet heard from enough of the general public to make this issue significant. Please do all you can to change their perspective!
Here's the petition wording:

Following the powerful Pedigree Dogs Exposed documentary on
BBC1 the Kennel Club still seems reluctant to grasp the nettle,
face the problems and reform itself. The program revealed it
urgently needs to bring in mandatory minimum standards on
levels of inbreeding, make health testing mandatory, prevent
unhealthy physical exaggerations being rewarded and stop the
culling of healthy non-standard pups by changing breed
standards. The KC continually complains that it lacks the
backing of legislation to bring in these urgent and much needed
reforms, so we the undersigned urge the Prime Minister please
instigate legislation to ensure pedigree dogs are saved from
unnecessary future suffering.

If you would like to add your name to this petition please go to this link:
http://petitions.pm.gov.uk/ReformtheKC/
If you'd like to know more about the issues raised by the TV programme, follow the petitioner's blog for all the latest developments http://coldwetnose.blogspot.com/
For example, did you know that the Cavalier Club are holding a Special General Meeting to expel one of their members from the health committee. Had they chosen to expel the woman who knowingly bred 20 plus litters from a dog affected by syringomyelia - the disease that was so memorably described on TV as "like a having a brain like a size 10 foot stuffed into a size 6 shoe," we'd all be very happy - but still no action has been taken against that breeder who used the affected dog at stud twice more after the documentary makers confronted her on camera! But no, astonishingly, the club instead plan to expel Margaret Carter, the brave lady who revealed on camera that this dog had been diagnosed with SM and that the owner had been advised not to breed from him. The meeting will be held at Yew Lodge Hotel, Kegworth, 12 noon Sunday 5th October.
Address: Packington Hill, Kegworth, Derbyshire, DE74 2DF
Telephone: (01509) 672518
Fax: (01509) 674730
Email Post