No it's not April 1st, the KC seems to be on the same side as us!

Would you believe me if I said they'd come down on Margaret's side...? (They've not told me this, hell hasn't frozen over or anything - we're still not receiving press releases from them or anything civilised like that.)

The Kennel Club is concerned about the Cavalier King Charles Spaniel Club’s decision to remove breeder, Margaret Carter, from its committee.

As this is such a big day, here's a quote from the lady who appears to have finally made the KC listen, after years and years of people like me trying to make them change.

“I am genuinely delighted to see that the Kennel Club has announced so many important new initiatives to tackle health and welfare problems in pedigree dogs. It vindicates the hard-hitting approach we took in Pedigree Dogs Exposed and of course, the real winners are the dogs. Getting a better deal for them was always the film’s primary objective.

“I am very disappointed that the Kennel Club has not acted immediately to ban the mating of first-degree relatives but, for the first time, there is mention of the importance of genetic diversity, which is hugely encouraging. There are going to be howls of protest from some breed clubs and it remains to be seen how much genuine change will result . But well done to the KC for finally admitting the scale of the problem and initiating at least some of the change that is needed.”

So everyone - do raise a glass to Jemima, to Carol Fowler and especially to Margaret this evening. There's still a long way to go, but I for one look forward to the day I don't have to be on the other side to the Kennel Club biting their ankles, when we can be sure they'll do their very best for our best friend the dog.

Still not time to forget the petition - and it seems they may now want to grasp the nettle and get the power to do the job properly, so there's no reason NOT to sign this petition if you love dogs as it will give them the power they say they want. Looks like we're all going to be on the same side if the KC does come up with the goods. We need the inbreeding issue to move up the agenda pronto.... but the glass is half full tonight.

Here's the link to the petition:
http://petitions.pm.gov.uk/ReformtheKC/

And while we're in jolly mood - please spare a thought for these three waifs and strays in desperate need of a home.... 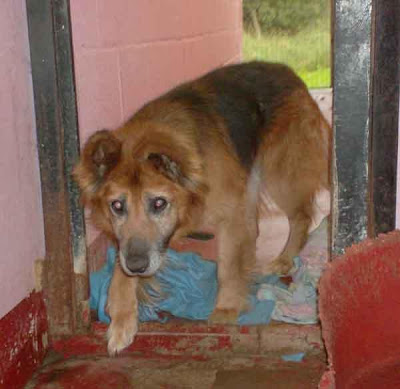 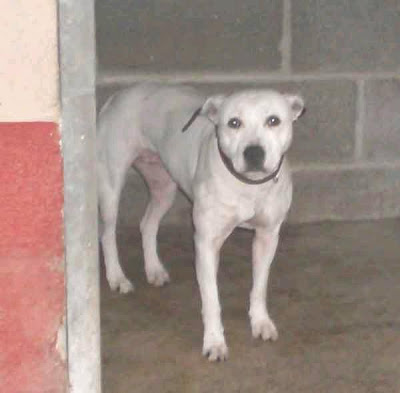 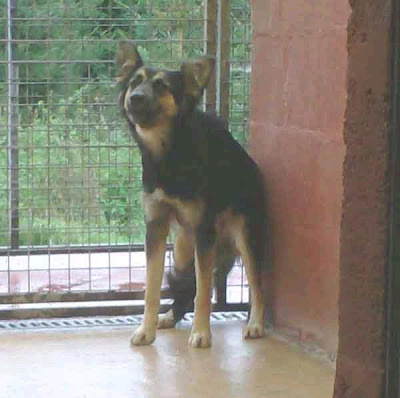 Attached are some pictures of some dogs that I am taking in tomorrow. Because Charlie the loon is here at home they will all have to stay at the boarding kennels I work at.

Can you put them on your blog? I know the pics are too small for your magazine (except maybe the GSD old boy as I have got the original of him) but I would love all the extra help I can get as they only have limited kennel funds (two weeks to find a home before kennel fees dry up.)

As time goes on and assessments are done I can update with names and character profiles.

Old GSD - Approx 10 years old. Found as a stray and never claimed. Due to be vaccinated, neutered and microchipped.

Scared GSD x - Approx 1 year old. Picked up as a stray and never claimed. Scared of absolutely everything, but we are hoping to change that. Due to be vaccinated, neutered and microchipped.

Staffie cross - Approx 1.5 years old. Picked up as a stray and never claimed. A bit nervy, but I am sure she will come round. Due to be vaccinated, neutered and microchipped.

(Any help appreciated as always.)

Anonymous said…
This has made my day. Margaret has worked so hard for Cavalier Health. The members who called for the meeting and voted her out have not harmed her reputation, but their own.

And she can still be voted in next year, so any Cavalier owners out there not members of the club, please think about joining. If more pet owners join the balance may be redressed in the future.
7 October 2008 at 18:39

Anonymous said…
Margaret,Carol,Jemima and Beverly. You have given all of us a debt of gratitude for your enormous efforts to help this sweet breed. You have done so much and you have sacrificed personal needs so that the lovely Cavalier King Charles Spaniel will always be available to comfort mankind. The best part of this day is that your efforts are being recognized.
7 October 2008 at 22:14

Virginia Woof said…
I am so very pleased to read of this recent turn of events. Surely it is how it should be...

Every CKCS lover tonight should toast Margaret Carter, Carol Fowler, Jemima Harrison and you Beverly, for raising our awareness of the serious nature of the health problems in the CKCS breed.

May the best efforts of the cavalier breeders, the KC and the AHT come together to ensure the healthy future of the breed!

Sonia Phelps said…
Such great news - the glass is indeed half full.

Best wishes to all,

Anonymous said…
Many thanks for posting up my new additions onto your blog.

Nervy Collie x girl pup (Scrummy) has now been placed in a homerun rescue. She turned out to be great and after about 5 minutes was jumping about like a lunitic this morning.

White Staffie cross (Snowflake) - Gorgeous and sociable girl. Great with people and other dogs plus loves to play retrieve!

GSD x old girl (Cadbury) is absolutely lovely and once Charlie is homed she can come home here until she finds a home or stay if she doesn't.

Anonymous said…
Beverley
I wonder how this health plan thing will work if it's got to be undertaken by Christmas.
For instance, would an independent geneticist look at actual examples of pedigrees, and tell the club whether they are going in for too high a level of inbreeding or not, as the case may be, and look at how many times the same sire each year is used?
Or would they take the club's word for it?
In some breeds, some breeders are doing intensive breeding, while others are not, so how will all this be found out?
As for health problems, there are so many things that are considered not very important, such as anal gland and prostate problems and deafness, which can cause great discomfort to the dog.
I'd love to know how they are going to go about this.
It would really need someone like Steve Jones to investigate, not a KC person.
After all, the KC's geneticists never spoke up before.
Thinking about it, why don't you put all the ailments that a breed is liable to get on your furry godmother listings?
For example, is someone knew that a dog from a certain breed was liable to go deaf at around the age of 7, they might want to think again.
I don't mind my dog being deaf and can cope with it, but I'm lucky because he stays close to me on walks.
10 October 2008 at 09:02

What we try to show on Furry Godmother is every condition that has a diagnostic test available that should be done before breeding or before the pups are sold.
It's constantly evolving though and we feel it should be owned by everyone and if someone wants it to go in one direction we'll consider it.
The in-depth Fido Facts is the place for all the full health info - stuff you can't yet test for.
With a listing you have to make compromises to make it still fit into a list.
We take our lead from the car mags - they have a listing and then they do in-depth road tests. When you've got a shortlist you then drill down and do more research.
12 October 2008 at 09:13