The trouble with Tess 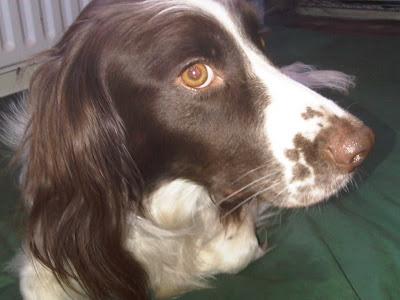 "Are you talking about me? I'm not a bad dog, honest."

barrie said…
My heart just breaks for you! If she were a spaniel I would say spaniel rage syndrome but she's a setter not a spaniel! It does sound neurological to me though. Poor thing :-(
20 May 2009 at 19:38

Beverley Cuddy said…
Sorry barrie, I must have typed Setter by mistake - we're doing Irish Setters this month in the mag.

She's an English Springerish, I guess. Although sometimes I think she does have a look of a very small Irish Red and White.
20 May 2009 at 19:43

Julia said…
I am so, so sorry for you Beverley. It must be awful for you, and so worrying. I hope the vet finds some relatively simple physical cause. Certainly fear seems to be a factor, at least on some of the occasions, which makes it sound neurological. Perhaps that old hole in the head holds the answer. I'll be thinking of you tomorrow when you take her to the vet. Please let us know how she gets on. I know when I had all the problems with Jez (my staffy) it was a real help to be able to 'talk' to people on the internet about it.
20 May 2009 at 19:58

TheEejits said…
Worrying with you! Hoping it is something easily sorted.

The hole? Perhaps a foreign body?
Will be watching avidly for news.

Positive thoughts winging their way across cyberspace. Fingers, toes and springer paws crossed here for positive news.
20 May 2009 at 20:15

Anonymous said…
Oh dear, and she sounds such a lovely dog! I do hope some reason can be found.
It does sound like the Jekyll and Hyde symptom of cocker rage but let's hope it's something physical that can be put right.
Julia Lewis
20 May 2009 at 20:31

Anonymous said…
Sorry I can't offer any help for this, I just wanted to offer my support. None of this is your fault, you have done everything you can for your girl and I am sure will continue to do anything that helps her. I thank the heavens that it was you that plucked her from the Dogs Trust that day and that in itself is in her favour.
Fingers and paws crossed that this is quickly remedied.

jo siemieniowski said…
Hi Beverley, I too think it is neurolgical, all I can think of with the "not knowing you bit" zak started with that before he was diagnosed with Epilepsy, he would wake up and completly be petrified of us, and it took a while before he would let us near him. also some of his fits are not what you would call "normal" he would lunge at the walls as if he was trying to climb them and howl in a most undog like fashion, I hope that she is not epileptic, and that you get the right diagnosis. please keep us informed, it must be very worrying for you. good luck
21 May 2009 at 10:38

jo siemieniowski said…
Oh Beverley, I have just looked up Fucosidosis on the internet, I hope that Tess does not have this, good luck at the vets fingers and everything else crossed .. jo
21 May 2009 at 10:54

Lucy King said…
I would also say neurological - especially as it seems to be getting worse over time. The hole in her head could potentially explain it a bit as well.

Lilly de Lure said…
I'm so sorry to hear that Tess is not well.

I know exactly how you feel as you are describing behaviour that is exactly the same as my cocker spaniel exhibited (although in her case it was directed at our other dog rather than people), right down to the strange, scream-like noise she's making. In our dog's case it turned out that she had Addison's Disease and her behavioural turns were mini-crises (has Tess developed any strange tremors at all or had any muscular weakness?).

if you haven't already you might want to get Tess checked out for it (if that's what it is it is very controllable with medication - certainly our spaniel is doing brilliantly).

Heather Houlahan said…
I'm sorry to hear about this.

I'm afraid that I've seen springer spaniels go this way. In this country it's generally called "springer rage," and it's anyone's guess whether it's one thing or several different, similar neurological problems. It's clearly hereditary. Obviously, you have no idea about Tess' ancestry. (I've also seen similar profiles in American cockers -- many -- and one golden and one Labrador retriever.)

I can tell you that the "fits" have not responded to psych drugs tried by the owners' vets, or the cure has been worse than the disease.

Nor does training help. What the owner has ended up with has been an impeccably trained dog who still has seizure-like aggressive fits. (Still, we train the dog because if it is not "rage syndrome," effective training will address the aggression.)

Fucosidosis I had never heard of -- apparently it is rare in this country, more common over there. Can anything be done for it?