Wilberforce lords it at Westminster Dog of the Year

Back for the 19th year, Westminster Dog of the Year has once again caught the competitive spirit of MPs across the country. In the face of strong competition from a Conservative group of entrants, Neil Parish and his Labrador Wilberforce were announced the proud winners of the hotly anticipated title. 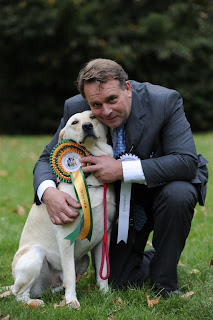 “I’m delighted that Wilberforce has won and shown what a brilliant dog he is. I’m sure his constituents in Tiverton and Honiton will be as delighted as I am that their local dog has won such an accolade. Events such as this highlight the importance of responsible dog ownership and hopefully more and more people will make the right decisions when choosing a dog and more importantly ensure they take on board what it means to be a good owner.”

Organised jointly by Dogs Trust and the Kennel Club, the award saw a host of MPs, nearly a clean sweep of Conservatives, and their dogs canvassing in the judging ring to be crowned the top dog. Whether describing their dog’s most heroic or good deed to comparing their four-legged companion to an A-list star, the judging was nail-biting stuff. The judging panel - Clarissa Baldwin, CEO of Dogs Trust, Vanessa McAlpine, Discover Dogs and Crufts Events Manager and 2010 Westminster Dog of the Year winner Helen Grant MP were faced with 17 dogs, ranging in size from Elvis the Chihuahua (Simon Kirby MP, Cons – Brighton Kemptown) to Sophie the German Shepherd (Karl McCartney MP, Cons – Lincoln). 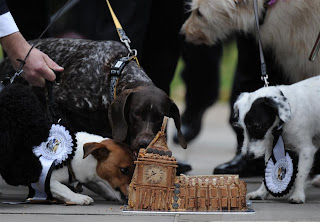 Summing up the reason for Wilberforce’s victory, Clarissa Baldwin of Dogs Trust says,

“Our Westminster Dog of the Year competition is all about celebrating the unique bond between person and dog, and Wilberforce is this year’s victor because the judges could clearly see the mutual love and respect between him and Neil.”

“Each and every year we hold the event as a way to get to meet some of the new four-legged additions to Parliament and we are pleased to see many new faces this year, along with some familiar ones. The variety of dogs that came down to today’s Westminster Dog of the Year shows how dogs of all shapes and sizes can fit into anyone’s lives and today’s event demonstrates how committed these MPs are to responsible dog ownership.”