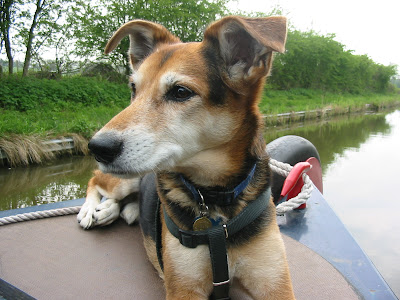 Max was the sort of dog that changed people's perceptions of dogs in general, and rescue dogs in particular. He was just the politest, most civilised dog you could ever hope to meet. His presence in our office was always a joy. He was so rarely naughty that he made all others appear like hooligans – well, my dogs specifically!
When Karen, my assistant editor, made the decision to relocate to nearer her family base in Norfolk we were all very sad to see them go. Karen continued to work for us as before, but Max's soothing daily presence was lost to us.
Karen acquired Max from Battersea Old Windsor not long after she started working for Dogs Today.
Max was a handsome, old-fashioned mongrel - timeless really. You couldn't quite see any one particular breed influence in him, maybe a bit of Shepherd or Collie but whatever the mix, he summed up what many people think of as a typical cross - even though these days they seem as rare as hen's teeth!
Max was already a fairly old dog when Karen rehomed him and it was a mystery why anyone would have opted to give him up. He was gentle, well mannered – a perfect gent in fact. He had a maturity and intelligence that some dogs never acquire; he'd just put his ears up and look on benevolently while the younger dogs in the office went crazy play fighting. He'd tolerate their impudence with consistent good humour. He'd also put up so patiently with my young son raining kisses on his head. Kieran loved Max so much that we had to intervene to stop him hugging him too tightly!
Max was a diamond dog that we all loved. But Max loved Karen and her husband Simon most of all, and together they had wonderful holidays and adventures. Max went everywhere with Karen, he always liked to have her in sight and even in old age would want to follow her from room to room. 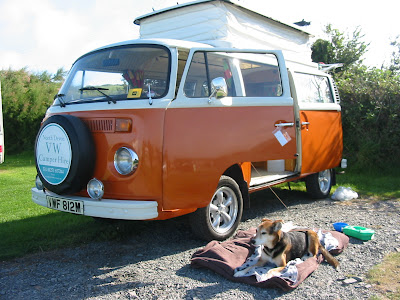 Max proved a natural at our photoshoots and his very elegant controlled sitting beg was the obvious candidate when we needed to design a logo for the Wag and Bone Show.

He was a strikingly handsome dog and those intelligent, sensible, kind eyes made him a popular first choice dog for lots of people. Amusingly, he fronted the Dogs Trust's Annual review one year even though he was most definitely a Battersea dog - and he graced our front cover, too. His famous begging photo also appears larger than life as a mural in many Dogs Trust training barns. 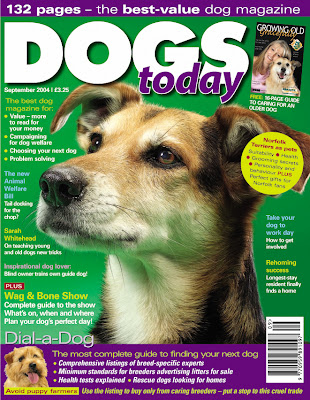 In recent months, Karen wrote a great article on CDRM and sadly it was a first person piece as poor old Max had been diagnosed with this depressing condition. (Perhaps there definitely was a German Shepherd element in him that had made him prone?) Karen had been expecting a slow deterioration, but then Max developed a more pressing problem - a nasty fast-growing lump that turned out to be malignant. The clock starting ticking down and she knew he was on borrowed time. Good pain meds and home cooking and lots of TLC made his last days the very best they could be.
Our sympathies go to Karen and Simon at this very sad time. Max was a dog in a million and the void he leaves is immense. We'll never know what the first half of his life was like, but there never was a more loved dog from the day Karen and Simon first saw Max at Battersea. 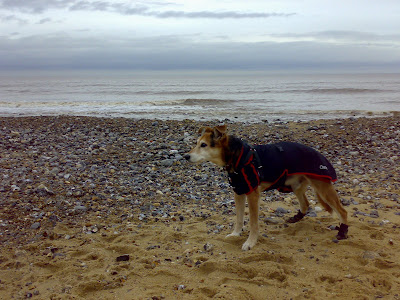 The last picture of Max, taken a week before he died
Email Post
Labels: Max

Princess Sarah said…
Hi, I'm Sarah, a friend of Karen and Simon's, and also one of Max's 'honourable Aunties'.

Max was a very, very special dog, who will be sorely missed by all who knew him, but especially by Karen and Simon. He was obedient, faithful and content to the end.

Max loved playing on the beach, amusing sheep, and most of all, he adored swimming.

He was an amazing dog, and it's wonderful to be able to treasure so many happy memories of him.

Anonymous said…
Max was such a handsome dog to look at and, judging by the comments made about him, he was obviously a wonderful natured dog too.

Anonymous said…
Oh dear. Tears falling as I sit at my work computer again. Please pass my sympathies to Max's mum and dad. He was clearly a wonderful dog. I lost my own Max last year and as many of us know it's heart breaking. That was a wonderful tribute Beverley.
...Vicky
31 January 2008 at 16:58

Jontus said…
What a lovely tribute to what was a lovely dog, by the sound of it.

I don't know what it is that makes me read things like this. I finished Marley and Me in a café earlier this week (my reward for getting my teeth checked!) and sat there blubbering my way through the end.

I guess dogs just touch us sometimes so very deeply.

Karen and Simon, you have my deepest sympathy.

Anonymous said…
What an absolute sweet-heart. Lots of love and best wishes to Karen and Simon, at what is undoubtedly a terrible time.
1 February 2008 at 22:54

Anonymous said…
What a wonderful obituary to a much loved member of the family. I lost my dog Bert exactly a year ago, so I know how Karen and Simon must be feeling. It will take a long time to come to terms with losing such a friend. My heartfelt thoughts are with them at this very sad time.
3 February 2008 at 19:45

Beanz said…
OMGoodness. We loved reading about Max in DT and send our heartfelt everythingness to Karen, Simon and all those who will be missing Max.