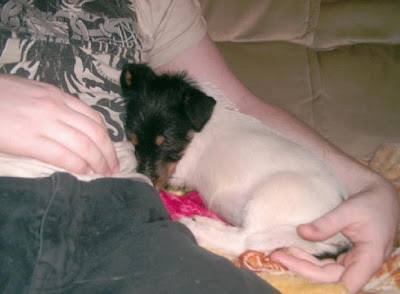 Regular blog readers will have heard about a wonderful woman called Emma Semple who works tirelessly in Surrey to find homes for dogs brought into the pound on the 7-day rule. She has a very kind heart and admirable stamina. She's just alerted me to a terrible story. Here it is in her own words:
"I had a call from the dog warden this morning [yesterday]. He had just had a six week old Jack Russell puppy handed into him who was rescued by an extremely brave lady who when she witnessed him being bashed over the back of the head with a piece of wood, she stormed into the gang of people and took him away.
"I was very concerned because when you hold him his head turns round and round. When he first got here, if you picked him up, he would scream blue murder, although that has stopped now and he has relaxed a bit.
"When you put him on the floor he walks in circles to the left and bashes into things. It seems his treatment has sent him blind and also deaf.
"I took him straight to the vets who did some basic tests and he confirmed that he is at the moment blind and deaf. They looked in his ears and saw no blood (which would realistically suggest a haemorage) but it is possible that he has a small bleed on the brain or concusion. It is also very likely that he is now brain damaged.
"With the injury inflicted it is possible that he may go downhill very quickly if he does have any sort of bleed, but because he is vey happy in himself and was getting seriously stressed out at the vets I decided to bring him home and moniter him throughout the night and take him into the emergency vets if he starts to go downhill. If this happens then he will have to be put to sleep, so tonight is going to be a long and stressy night!
"He has a shot of steriods to try and bring any swelling on the brain down that may have occured and he has also had to be wormed and defleaed because he was dripping fleas when he arrived.
"I have taken some pics of him here tonight in case anything happens to him this evening and then I have got some adorable memories. At the moment he has had a wander about and is now sleeping. We have been told to keep him as quiet as possible.
"I am hoping that this little puppy who I was too late to help will be around to help him through tonight..."
A few days before Emma had been alerted to another puppy who had this time been beaten to death.
This morning Emma posted the following update:
"It is a great imporovement on yesterday as he was just continuously circling. I doubt that he will ever be 100%. He is also a mute. He doesn't make a single noise. No yapping, whining or play growling. And he is going to be the type of dog that you cannot pick up. He is confident on the floor but panics when you pick him up. This is just going to be the way he is. I am also doubting that he will hear ever again but there is slight reactions with his sight now. It seems that he is seeing shadows but no definite shapes.
"Charlie is being like a mother dog. If he isn't playing with him then he is laying next to him sleeping or washing his little bits (his willy and his bottom). It is exactly the same as Tara used to do when her puppies were weeks old. Charlie is very gentle. I might add that Charlie is still looking for a home and if you could take 10 minutes to read his story you will see what vast improvement he has made."

I must say I am shocked by all this barbarity.
Emma tells me a child's pet rabbit has also been stolen locally. It was placed on their doorstep with its head cut off.
Someone needs to find the people torturing pets and start sorting their heads out. There is plenty of evidence that cruelty to animals soon escalates to cruelty to vulnerable people. If they are capable of doing this to adorable defenceless pups what else are they going to be getting up to...
Will ask Emma where approx this is in Surrey so anyone local can be especially vigilant. Whoever is doing this is someone's offspring.
Just heard from Emma, this is happening in New Addington, Surrey and apparently the police aren't interested. Deep sigh. They obviously haven't read all the articles from the profilers in the States that flag up animal abuse by children as being a significant sign of an emerging serial killer. As soon as you lose respect for another's life where will it end?
If you are local please write to your MP and the local chief of police urging them to take animal abuse seriously.
Thank goodness for wonderful people like Emma who always seem to find space in their hearts and homes for another one no matter how challenging. 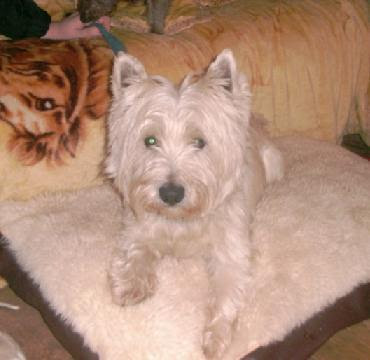 Do check out Charlie (pictured above) as he sounds like a dog in a million, too. The more she finds homes for the more space she has to save others...

bugs said…
Why does it no surprise me that this is happening in New Addington. I aplogise to all the decent people who live there, but so many stolen dogs have been found there, and there are some very unsavoury people there.

I really hope that little Wizbet improves, and the morons that did this, pay for it big time.

Gentle hugs for this baby, and I really hope Charlie finds his forever home very soon.
7 June 2008 at 14:05

Alice said…
I have just read this post and have to say that I am utterly appalled, as I am sure other readers are. I simply cannot believe the police are not interested. Disgraceful. All I can say is that it is truly touching to read about people like Emma who have such huge hearts when some in the world appear to have none.
7 June 2008 at 14:09

Chapstaff said…
I've just finished reading a biographical book about serial killers & yes - one of the first signs many of them displayed was torturing defenceless animals...........then they moved on.......!

Anonymous said…
Hi! Emma here!
Wizbit continues to do very well and is in fact well enough that he can have his first jabs and microchip tonight.
This means that pretty soon he will be bale to go off to a new forever home who will love him.