The most expensive dog in the world 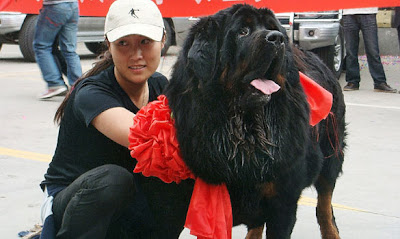 Just on the point of rushing off to the school run and parents evening I got a call from the Times asking me about a Tibetan Mastiff who had been sold to a Mrs Wang in China for approximately £350,000. I hadn't seen the photo until this morning - but it doesn't look like "the best Tibetan Mastiff in the World to me". Perhaps it has just had a load of water thrown all over it - but those eyes look sore and the chest looks full of drool. And look how much loose skin there is hanging over that bow - ugh! Looks very exaggerated to me.

"Why did Mrs Wang pay £350,000 for Yangtze River Number Two? It is difficult, even for a dog lover, to know what makes a dog worth so much. Most dogs sold for extremely high prices are skilled — a highly trained sheepdog, for instance — or have won the Best in Show prize at Crufts, for example. Perhaps Yangtze Two was sold on mythology: is the dog the reincarnation of a Tibetan monk?

The Chinese attitude to dogs is varied. At one end of the spectrum dogs end up on the menu. You can buy dogs on eBay, and owning dogs as pets is still an emerging hobby. At the other end, rich dog owners bring in overseas trainers to ensure that they get it right. But one of the most unfortunate developments is that the Chinese seem to be adopting the Western, and many would say dubious, practice of dog showing. Dogs Today has campaigned against inbreeding caused by the pedigree dog show system for almost 20 years.

If you inbreed and close the gene pools you are destined for disaster and dogs with endemic health problems. This is a worldwide issue, but invented in Britain: the Victorians created the concept of the purebred dog, and that was also the era of the freak show. Until then dogs were bred for a purpose.

We must also dissuade people who are breeding just for the cash, and ensure – whether a dog is purebred, crossbred or a mongrel – that it is healthy and the owners go into it with their eyes wide open. This is beginning to happen in Britain, and it must happen in China, too. Let’s hope it is the case with Yangtze Two.

I can think of one dog, and only one, that is worth £350,000: Endal, an assistance dog who belonged to the badly injured Gulf War veteran Allen Parton. He could put his owner in the recovery position, use a cash machine and order drinks at the bar. According to Mr Parton, he even saved his marriage.

One of my own dogs, a bearded collie, cost £650 and the other £75, for a rescued springer spaniel who had been abandoned in a Tesco car park. They have both been excellent value. I wouldn’t sell either of them for £350,000.

Click here for the Mrs Wang story in the Times in full. (A motocade of only 30 limos.... I'd have the thought the neighbour's would have made a bit more of an effort!) I think Pedigree Dogs Exposed may need to air in China some time soon...
Email Post
Labels: Most expensive dog in the world

Anonymous said…
get off yor hobby horse and get yoru facts straight, you do like to muddy the waters with your foolish quotes, the Chinese and Tibetans have been breeding pure bred breeds for THOUSANDS of years long before Victoria came to the throne, indeed part of the annual gifts to the Emperors of China were the pure bred dogs of the Tibetan Court, as for Tibetan Mastiffs Marco Polo acounts just what they looked like and how they were bred to remain true to type.....as for ebay comment I think they might be up for a legal case for that comment as they DO NOT allow dogs to be sold on their site! sounds like you LOVE to be QUOTED in the newspapers
11 September 2009 at 12:04

Beverley Cuddy said…
Oh Sirius, we really must stop meeting like this...

Let's start with ebay. Now you may not have got your April 2005 edition of Dogs Today to hand, but on page 3 we revealed that our reader Tim Norris had discovered some Rough Collie pups available to buy on ebay. They appeared to be in China and the seller had sold very many other dogs and was happy to put them on a plane to the UK seemingly unaware of pet passports or quarantine.

We tackled ebay and they revealed that in China dogs are allowed to be bought and sold on ebay. It's just that we normally can't see them!

So Sirius - perhaps it is you who should check your facts!

Tibetan Mastiffs are of course an ancient breed, bred to guard - not to win rosettes! Get off your unfeasibly shaped hobby horse cowardly Sirius.

And yes I am happy to reveal who I am and what I believe... unlike you who hides behind a cloak of anonymity or a collection of silly made up names!
11 September 2009 at 12:34

Mandy said…
Isn't it sad that Sirius/Anon. seems to love the idea of dogs being and looking a certain way with apparently very little compassion or concern for their health and wellbeing (not to mention the wellbeing of the owners whose beloved inbred pedigree pets cost them thousands of pounds and much heartbreak). I am purely surmising this of course but reading Sirius' comments this does seem to be the case as he/she constantly undermines Beverley's attempts to highlight these very real concerns.

Maybe Sirius would like to meet my beloved Belgian Shepherd Dog (Groen.) who I took on as a rescue at 8 months old and have since discovered was the result of a half-brother and half-sister mating. He has epilepsy, an underactive thyroid, allergies to many foods and flea-bites, hip dysplasia and some issues with aggression (although this is partly due to his breeder selling him to unsuitable owners at the age of 5 weeks). As I write he is at home with a muzzle on to stop him tearing his itchy skin to pieces (a problem which has arisen in the past few days after being given antibiotics - he is so sensitive to everything it is a nightmare at times). He is a lovely, loving dog who doesn't deserve to be going through this much suffering. He is a lovely "type" as a result of his inbreeding (and I do understand how breeders love their dogs to look a certain way) but I would give that up in an instant to have him happy and healthy. Can't Sirius take off the blinkers and recognise there IS a problem - and that it is ONLY bad breeders who are being targeted, such as the one who bred my lovely boy. I am sick and tired of this "point scoring" - for God sake get on board and do something to help instead of attacking those who have had the courage to speak out.
11 September 2009 at 13:36

In the pink said…
Now we are hearing about tendon cutting and Botox for dogs in this eternal, ridiculous quest for the perfect (just in whose eyes I'm not sure)dog. For the life of me I just cannot understand why Sirius thinks there are no bad PEDIGREE breeders and that the only culprits are those who produce crosses. We have pedigree dogs and sadly a lot of bad breeders in our beloved breed too.
14 September 2009 at 17:37