Has anyone seen grieving Romany? 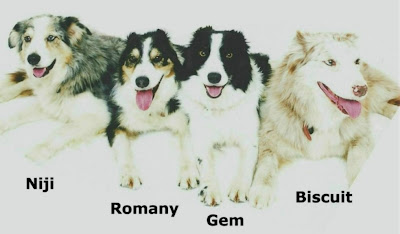 Just heard of this very sad story from Border Collie Rescue - can you please post details anywhere you think it might help?

A man called us saying he had two Border Collies to rehome, 11 yr old sisters. Romany and Niji.
He explained that his wife had just died of cancer and he could not continue to look after the dogs properly on his own, due to work commitments.
He advised us that they had bred a litter and kept these two dogs with the mother, and that the mother had died a week after his wife and that the dogs were grieving for both their human and canine mum.
We decided to act promptly to avoid further issues setting in and set up a date for him to bring the dogs to us.
He told us that he, his wife and all the dogs had been regular climbers of Ben Nevis and he proposed to make a final trip up the mountain to scatter his wife's ashes on Tuesday 24th March, with the two dogs, and drop them into us at York on his way back down country on Thursday 26th.
He turned up with one dog, Niji, explaining that Romany had run off on the mountain side in the fog when they were ascending. He aborted his plan to scatter the ashes and spent as much time as he could searching until the weather set in with sleet and snow.
Romany is deaf and epileptic, but had not suffered a fit for three years and was on daily medication.
He signed both dogs over to us and we started a campaign, via net, emails and twitter to spread the word and try and find her.
The media seemed completely disinterested and so far only one paper, Aberdeen based Press and Herald, has printed an article - that on the local pages for the area. Nevis Radio has been regularly broadcasting appeals.
Several newspapers have contacted us and we have sent details but have printed - nowt!
We have notified all appropriate agencies and have local volunteers searching, putting up posters and following up sightings. Local SSPCA inspector has provided a dog trap, even hiking up the mountainside with it. One helper persuaded a group with a helicopter to sweep the area on one clear, fine day.
The email campaign is now being spearheaded by a lady in Sussex who has sent out hundreds of messages.
She is now emailing vets around the UK asking them to look out for the dog if one of their clients turns up with a new Tri BC. She is chipped and that is now in our name. It is quite possible that someone has found Romany, that she is quite safe and our concerns for her safety are unfounded.
Doglost have a page for her and their Scottish co-ordinators have been out on searches. Local Mountain Rescue have looked - not as a team, but as individual volunteers. Dog wardens, etc all aware. Local search on today. There are tweets and re-tweets going on through twitter. The local area around Fort William is saturated in posters. Many and varied forums now carry the message with a link to our webpage. Details, updates and images on this page.
We are keen to get some press coverage to get word out generally, on the basis that a visitor to the area may have picked her up and taken her home to anywhere in the UK - hence the wide vet email information campaign now in progress.
It's now 2 weeks since she vanished and weather conditions up there have been bad for much of that time, however we are hopeful that she has managed to survive somehow as she is apparently a good scavenger and is used to living and spending time in outside kennel and run.

jo siemieniowski said…
I hope they find her soon, I can,t imagine how I would feel if my Zak went missing. without his medication he would be fitting several times a day. and the stress he would be under would be unbelievable. lets hope and pray that romany is found soon
11 April 2009 at 07:56