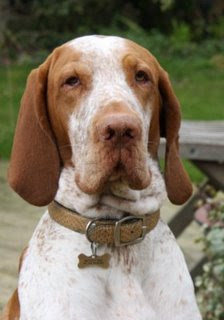 I've been twittering today rather a lot and neglecting the blog. But I've been writing, too. Wouldn't like you to imagine I've been slacking. My Twittering ambition is to get one of the really huge celebs to ReTweet something about Jacob, the Bracco Italiano that has been missing since January. I just figure all us doggie people already know to keep an eye out for him, we just need all the non-dog people to have a look around their neighbourhoods, too.
I am sure someone has taken Jacob in, bought him in a pub probably. Someone who probably has no idea he has owners worried sick somewhere. Probably imagines he was maltreated as he'd be lean and uncared for after being on the run for so long.
We just need more people looking.
If you are on any non dog forums can you spread the word, too?
If you're on Twitter - please RT.
If you're on any social networking sites now is the time to raise awareness. There's been sightings of a man walking a dog like Jacob in the Welwyn Garden City area.
Let's try another push to get everyone looking for Jacob. He has a pea sized lump on his shoulder if you're not 100% sure.
A few days ago Demi Moore saved a suicidal woman on Twitter, I'm sure a few Tweets could save this dog and reunite him with his worried owners...
I've started by targeting Jonathan Ross - Wossy. He's one of the most popular people on Twitter - if he retweets the message over 100,000 people will know about it. I've had two goes but he's been very quiet on both days and probably has hundreds of unread messages on Twitter.
Here's a message to send to others - you might have more luck.

Please can you help reunite this gorgeous lost dog? One of your followers might have seen him being walked? http://tinyurl.com/cyndze

Let's spread the word and if someone has Jacob and is unaware he's hugely missed perhaps we can get the message to him!

Here's another video of Jacob.


Missing Bracco Italiano Jacob, who went missing from the Saffron Walden, CB11 4XB area on 21st January 2009. Jacob is a 3 year old male, orange and white in colouring. He stands approximately 27" at his shoulder height and would have weighed about 38kg as at 21/01/09 Any information relating to his whereabouts, or possible sightings please call on 07828 671550 REWARD OF £500 OFFERED FOR SAFE RETURN - NO QUESTIONS ASKED

James A said…
Richard Hammond has posted a link on Twitter - suggest u try Stephen Fry - he has the biggest following of all and is a prolific Tweeter....

Anonymous said…
I've been following Jacob's sad story from the beginning and i really hope he's found soon. How can he have just vanished?? Someone must have seen/heard about him somewhere!

flossiedingle said…
Come on everyone, please spread the word about the lovely Jacob. He needs to be back where he belongs.
Shelley and Jon are so desperate to get him home.
7 April 2009 at 14:09

Beverley Cuddy said…
Ben Shepherd is now on Twitter and according to Andi Peters he's doing an item on Twitter on GMTV tomorrow. Be a good plan to all twitter him about Jacob? @benshephard
7 April 2009 at 16:49

Jane S said…
Jacob is a much loved family pet and missed so much by Jon & Shelley. We are trying to help find this lovely boy. Someone ou there somewhere knows where he is, its now 11 weeks since he went missing. I hope he is found very very soon. Come on Jacob :-) x
7 April 2009 at 19:12